Your mother might have taught you not to answer back – but at Pickle Jar we say always have the last word!

The importance of responding on social media.

Don’t leave your audience hanging, if you ask them a question and they respond, reply back.

Saying that social media is not a broadcasting method but a conversational platform is nothing new, and thankfully we are seeing more and more companies and organisations understand this underlying factor of being good on social media. However, recently we have noticed that some of the really big boys out there are still not engaging in a proper two way conversation. We see them throw a ball out there in the form of a question which is supposed to e 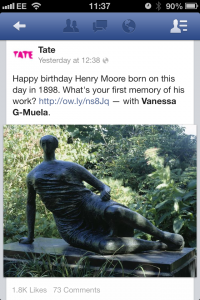 ncourage engagement, and then instead of engaging themselves in that conversation, they leave their audience hanging.

If people are going to take the time to personally engage with you, your company, organisation or brand, then you must engage back. It’s a bit like a teacher telling a class to just talk amongst themselves about a topic, and then never listening to what they had to say or provide any feedback to what was talked  about.
We saw a recent example of this on the social media accounts for Tate Modern. In many ways, Tate Modern are social media pioneers within their field, and do an excellent job of making use of lots of different social media tools, and channels. They have a very large and engaged community, who seem happy to read, like and occasionally comment. We had a little look through some of the most recent posts on Tate Modern’s Facebook page, and were surprised to see that although most of the posts were formulated in way that was inviting engagement and not just broadcasting a message, there were very few replies back from Tate Modern themselves unless a specific question was asked. But social media should be a two way conversation, not a question and answer session.

It wasn’t even as though Tate Modern were completely inundated with comments, making it difficult for even the most advanced social media team to reply. On the contrary, they were only getting between 50-100 comments on a post, making it very doable to drop a few replies thanking people for their comments, or responding back in a human manner. But alas, instead we saw people recounting personal stories to Tate’s audience and getting nothing in return.

As a manager of a large social media account, you are the authoritative figure and people love it when you, acting as the official representative respond. A comment is one of the highest levels of interaction you can achieve on a post, and that should be rewarded with a reply to make the person who commented feel it was worthwhile and valued.
Early this year, Facebook introduced the reply feature in comments. Although this has had some teething problems and can sometimes be difficult to organise between most recent and top comments, it does allow you to have a conversation with an individual by specifically replying to their comments.

Community management isn’t just about moderating your community, it is about talking back and having a conversation. Don’t leave them hanging…

*Why did this bug me so much? Because I was hung out  after posting this http://instagram.com/p/cY6p16QxeD/ 🙁

Update: I got my reply 🙂

@skipchris thank you, we try to respond as much as we can. Hi @emiliaf sorry we missed your Henry Moore post, we really enjoyed reading it.