Snapchat is one of the newest players on the instant messaging app scene, and has received an incredible reception, particularly amongst younger mobile/tablet users, with approximately 700,000 images or ‘snaps’ being sent every day.

Some have been left confused by the self destructive nature of receiving a picture and it disappearing forever within 10 seconds, but with the development of ‘Snapchat Stories’ which last for 24 hours and a ‘chat’ feature, many brands are jumping on the bandwagon, as it swiftly becoming a good way to visually engage an audience, students in particular.

I for one, thoroughly enjoy a good Snapchat. I consider it ‘Facetime without the commitment’ catching up with friends in a visual way quickly. It adds a personal touch to communication, which can often be quite ‘faceless’ these days. Plus, it doesn’t matter if you send an ugly picture because it will be gone forever in 10 seconds! Result! Unless you are a screenshotter of course (don’t be that person.)

Snapchat are also showing some signs of planning an advertising model for the app, but have made an effort to convince users that it will not disrupt, but in fact enhance their experience. Check out the official post from Snapchat about this here.

Due to the nature of demographics there is great potential for Snapchat to be a very useful and engaging communications tool in higher education, if used correctly and strategically. Some institutions have already been using Snapchat for higher education purposes, and have experienced great results in doing so.

University of Houston (UH) was one of the first universities to identify this opportunity and began to use Snapchat to communicate with the student body. The application would be used to update students on upcoming events and also inform them if University was to be cancelled due to bad weather. According to an article on the UH website, the account has gained 695 followers, with 80% of them opening the Snaps provided by the university. 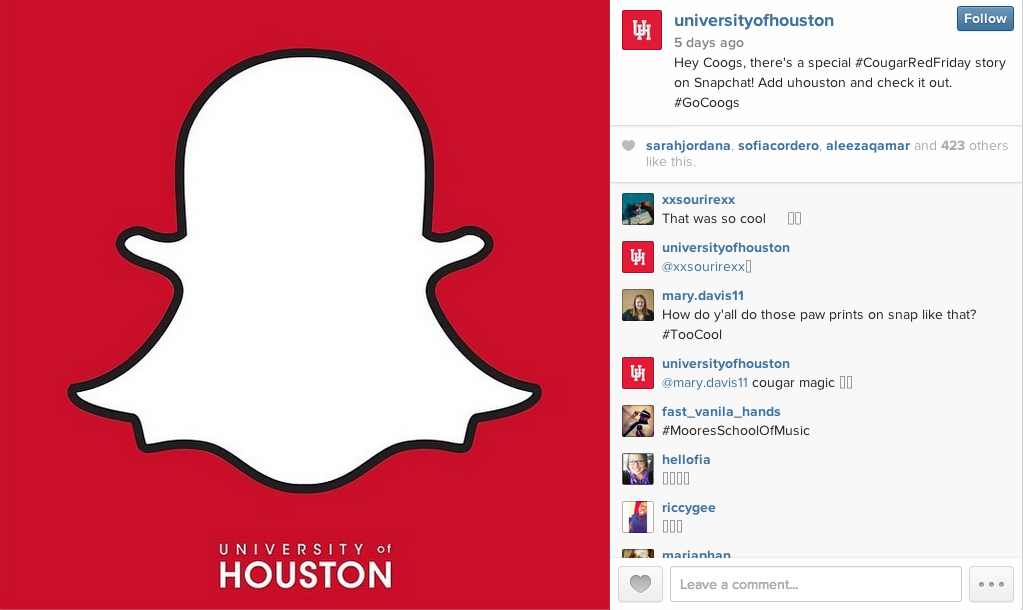 In terms of attracting prospective students, Tennessee Wesleyan College created a ‘Snapchat Treasure Hunt’ on a Visit Day. This personal touch allowed the prospective students to feel involved and a part of the university community from an early stage, which is an imperative component in the decision making process.

Recently, Snapchat has brought ‘Our Story’ which previously focused on festival scale events, to college campuses, aptly named ‘Our Campus Stories’. This new feature will allow students to take snaps and post them into one communal story, however you will only be able to view the story if you are on campus, which is a fundamental difference to other ‘Our Story’ campaigns executed thus far.

This move by Snapchat to add location-based features is more akin to what we see on other platforms such as Whisper, YikYak and Secret. This shows that these apps, including Snapchat with its higher profile, recognise the importance of the hyperlocal networking experience, which is interesting to consider when developing strategies for social media campaigns for your institution in the future.

Snapchat's next Story is a live feed of college life http://t.co/xnPAFsv1hp pic.twitter.com/VNbwhOPq3S

The first universities and colleges to test out this new feature are UCLA, University of South Carolina, Penn State and UT Austin, so we will be keeping an eye on the success of this as it progresses.

But keeping things simple for the rookie Snapchatters out there in higher education, what tips can we offer you to create an engaging Snapchat campaign? You will need to consider the following questions:

Who is your audience?
Current students, prospective students, alumni, they will all be interested in different information, so a clear decision needs to be made on who to aim the snaps at.

How will you build your Snapchat audience?
More than likely you will need to combine social channels, so use your other platforms to build up the followers.

What is your message and can it be conveyed in quick visual?
Is it clear and concise? Will the Snappers understand in ten seconds what you are trying to say?

What picture should you use?
Choose your picture carefully and spend time crafting it. Don’t offer up a possibility of a mixed message. Make it engaging, use bright colours and keep it light-hearted using the ‘doodle’ tool if appropriate.

Can it be made interactive?
Is there potential for your institution to create a competition for your audience? Get them involved, offer a possible incentive and watch the Snapchat campaign prevail.

Unfortunately, as with any other social media tool, there are negative aspects of Snapchat and it can be misused and this has been reported at length in the media, which could put institutions off. However, if used correctly, I think it’s potential is gigantic, definitely amongst young people. Higher education is well placed to get involved and see engagement with students soar!

Find out more about how Pickle Jar Communications could assist you in the planning and implementation of campaigns for your institution here.