How great is your campaign idea?

We’re told there’s no such thing as a bad idea, but there are times when that’s just not true.

I’m a fan of the brainstorming technique that creates a “safe creative space” – letting everyone in the room talk about possible ideas without anything being automatically dismissed as a “bad idea”. But the whole purpose of the exercise is to discover which ideas are the best, and which ones just aren’t going to work.

We’re looking at campaigns this month on the Pickle Jar blog. Last week Tracy talked about why you should consider a campaign-based approach to marketing. She mentioned that a campaign needs a “hook”, an overarching theme to make it stand out from your other ongoing marketing activities.

It’s that “hook” that I’ll be talking about in this post. It’s important to remember that not all campaign ideas will work for you or your audience. Just because you think you’ve come up with a great idea, that doesn’t mean it’s going to succeed.

What does your audience want?

What do you know about your audience? Have you found out what appeals to them? If you haven’t, then you’re just shooting in the dark, and you’re probably going to miss…

If you have done your research, then you should know the likelihood of your campaign idea working. It won’t always be guaranteed, and sometimes you might have to put in a lot of effort yourself to make the campaign succeed, but that audience knowledge is the important first step.

We’ve written about audience research before. When you’re coming up with a campaign idea, the key part of your research is the personas: characters constructed to represent your different audiences or users. They have names, jobs, interests, needs and – importantly – motivations that should influence how you interact with them. You can use these to determine whether your campaign hook is going to work for them.

A great example of understanding your audience comes from Arts University Bournemouth. The university created an app called kscope, which allowed users to create still or moving kaleidoscopic images and share them with each other – like Rosie’s example here:

Because Arts University Bournemouth knew that their students and prospective students were very creative, they understood that this interactive visual approach would appeal to them – in a way that wouldn’t appeal to students of a less arts-focused institution.

What has sparked off your great idea? Did you see a few other companies doing a similar thing? Then maybe it’s time to step back and think of something else. While there’s often wisdom in following a tried and tested method, if you end up as just one of many doing the same thing, your message will be lost.

In a similar vein, think about the overall timing of your campaign. If your great idea is based on something topical, will it still be relevant when your campaign is running in three months’ time? Obviously, great campaigns can be seasonal or otherwise time-dependent – but I’m not talking about a Christmas-related campaign running into February. News and popular culture moves so fast nowadays that your great topical idea might not have its hook next week, let alone next month.

To me, this is what happened with Delta Airlines’ recent in-flight safety video. They tried to make “the internetest safety video on the internet”, using an overload of online memes interspersed with the usual safety information: 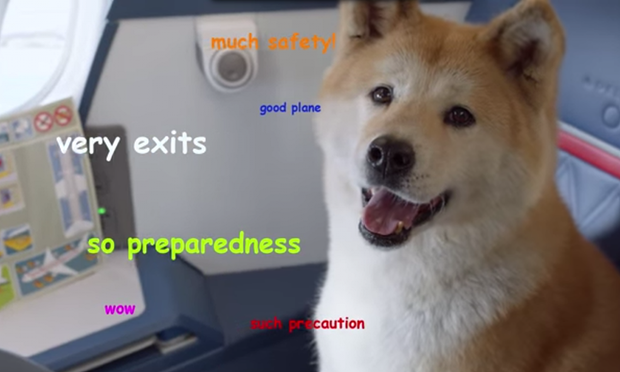 While the crux of the idea wasn’t bad – memes are popular, after all – the execution didn’t work. Sadly, because of the speed at which online humour moves, most of these references are now several years old – making a mockery of this attempt to be relevant.

It’s very easy to get attached to an idea when you’re the one who came up with it. When the idea is a good one, this isn’t a problem – but if you’re hanging on to a bad idea in the face of contradictory audience research data, it’s time to take a step back.

Don’t hang on to an idea just because you’ve fallen in love with it. Maybe file it away for now. When you come back to it in the future you might find a more appropriate use for it. Even more importantly, don’t keep forcing an idea just because it’s yours. Put your ego to one side and accept that, in this case, you might need to try something else.

With that said, if you’re unsure about how good your idea truly is, you could do some low-level testing first. There are a couple of ways to do this:

No such a thing as a bad idea?

The important thing to remember here is one simple thing – does my audience care about this? If the answer is no, then your idea will remain just that: an idea.

If your idea connects with the audience and takes them along for the ride, then your campaign has far more chance of succeeding. For a few examples of great work in the education sector, you could take a look at recent winners of the CASE Circle of Excellence awards.

If you want to have a chat about your ideas, or how you can start to think about great campaigns, just get in touch.