Born in an information-fragmented era, the original Sina Weibo service only supported 140-Chinese-character input in a single post (equivalent to a Tweet). Even though 140 Chinese characters usually contain more information than the same number of English characters, this limit is still a barrier for businesses communicating on the platform. This is especially the case when businesses are keen to provide more information for their audience. In May 2014, Weibo launched a new feature called “Long Weibo” to address this problem, enabling users to exceed the 140-character limit when generating a Weibo post.

In a Long Weibo post, a user can upload an original article up to 10,000 Chinese characters. Furthermore, instead of the Twitter method of sharing hyperlinks (and closer to Facebook’s new Instant Articles tool), Weibo users can browse a Long Weibo post directly without accessing an external website. This significantly reduces the amount of time it takes to load an article.

Generally, there are two available ways to generate a Long Weibo post. The first route is through using third-party plug-ins. For example, users can type in an article in a text entry box on Changweibo.com. By clicking “Generating a Long Weibo” button, the plug-in automatically transforms the text-based article into an image (.png format). Users can thereby share the article as an image on Sina Weibo. 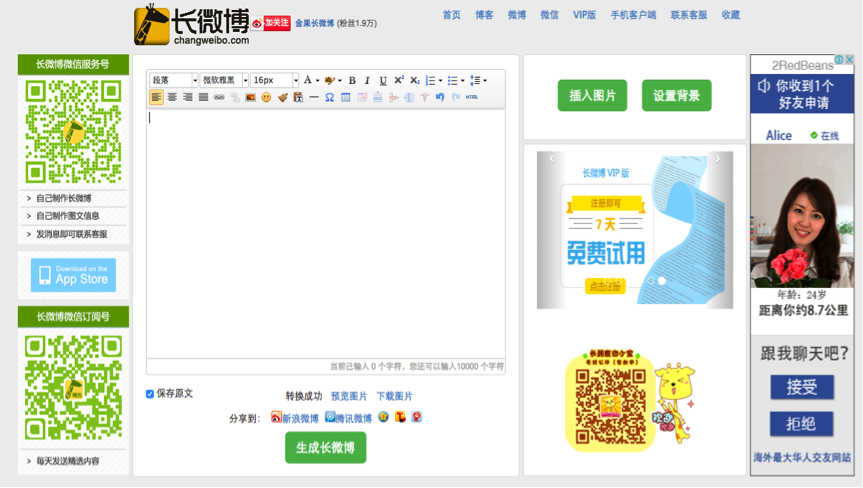 In the meantime, Sina Weibo also has an integrated plug-in to support Long Weibo. To access this plug-in, the user can click a “blog” button underneath the Weibo post text entry box.

By clicking the “blog” button, a Long Weibo text entry box will appear. Users can upload a text-based article with a maximum of 10,000 Chinese characters (including a title) alongside with emoticons, pictures, and videos. In addition, the videos have to be shared on Sina Video prior to the upload of the Long Weibo post. The article does not appear until an audience clicks a “continue reading” button. 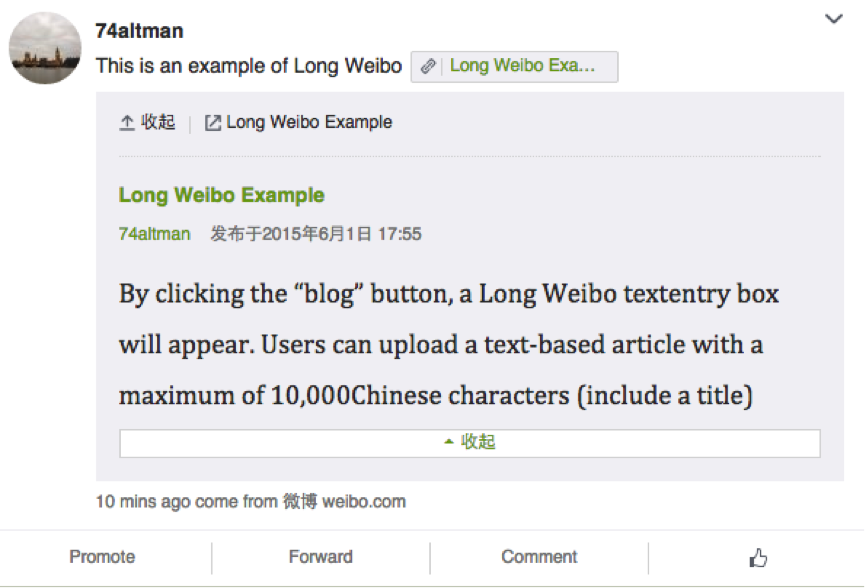 These days, increasingly more businesses are aware of the limits of a traditional 140-character Weibo post and are using Long Weibo to address the limit. Here is a good example of the use of Long Weibo from Xiamen University’s official Weibo account.

On 1st June 2015, Xiamen University’s official Weibo account created a Weibo post to notify followers a forthcoming Campus Open Day. It became apparent that 140 characters couldn’t cover all the information about the event. The university therefore provided a Long Weibo post as well.

The Weibo post comprised two parts. The first part is within the 140-character limit, stating the general arrangement of the Campus Open Day. All the detailed schedules, including timetables and activities, are presented in the attached Long Weibo section. The Weibo post allows the university to provide sufficient information about the Campus Open Day to relevant audiences. Yet this does not irritate other followers who are not interested in the post because the detailed timetables will not appear unless users click the “continue reading” button.

Long Weibo posts have quickly become a useful channel for businesses to engage with audiences online in China, and will only become more popular in the future.

If you would like to find out more about Long Weibo or need help reaching your Chinese audiences, please get in touch with us.