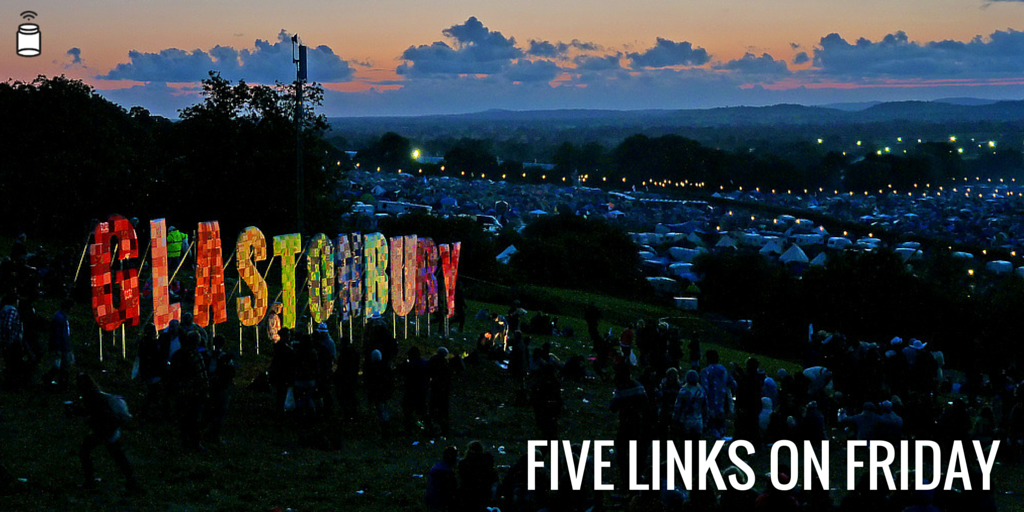 You won’t have missed that the UK’s biggest music festival is taking place this weekend. Obviously this is of huge interest to university students, many of whom will be packing their tents, flags and wellies for a few days of uber-cool music (and some more niche stuff…)

Glastonbury is a huge deal, so it’s not surprising to see universities get involved with the online chat around the festival. As well as the Free University of Glastonbury, a series of talks taking place at the festival, we spotted a few other university mentions:

Buckinghamshire New University were pleased to have sent students to help with the production of the festival:

And Southampton Solent students were helping as well:

Hello @glastoofficial! Its the evening before gates open and Solent Takeover are ready to take you on! Follow @SolentTakeover on Twitter for loads more updates from across the festival.

But my favourite was the University of Surrey getting credit for pointing out how dangerous festival wristbands can be:

If, like most of us, you’re not at Glastonbury, we’ve got you covered – here’s our top five links from the past week:

The use of humour in communication is a recurring topic for us, so we liked this post from NewCity about lessons higher education marketing can learn from comedy:

Brilliant post from our friends at @NewC1ty about the similarities between stand-up #comedy & #highered branding http://t.co/JzeUPa0Vcn

This is an interesting blog post by Mark Brandon on the value of Twitter for scientists (and other academics):

We love this post from @icey_mark who shares his views on the benefits of using @twitter http://t.co/ECG2lF012w #socialmedia

As part of this month’s ‘Campaigns’ theme, Altman looks at some campaigns from China:

This week on our blog, @74altmangmailco gives an insight into #campaigns in China: http://t.co/ksfkbzZ2hP pic.twitter.com/DlZvTjDZnC

And finally this week, it turns out that viewing things on our phones is more engaging than on our computers:

That’s all for this week. Enjoy Florence, Motörhead and The Who, and we’ll see you next week.