Experimenting in education marketing and communications: the sector speaks 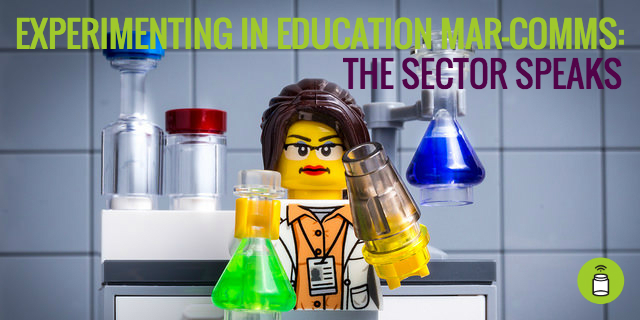 Throughout August 2015, we blogged about how to be more experimental in your school, college or university’s marketing and communications within a culture that can often be rather risk averse. As we added our own thoughts, and welcomed those of others, I’ve also been busy gathering advice from some of the people working in education sector marketing and communications that I have the greatest of respect for. Here’s what they had to say from experiments they’ve tried to approaches they take through to some just damn right sound advice…

Beth Elzer, Creative Director from Imperial College London is, in my view, one of the most fun and creative professionals in our sector. We worked closely with Beth last year on the CASE Circle of Excellence Gold Award Winning project, the Imperial Success Guide. She’s also the communications track open plenary speaker at this year’s CASE Europe Annual Conference (1 September) where she’ll be speaking about “Thinking Outside the Box” in education communications (if you’re attending CEAC, stop what you’re doing and go to this session). Here are Beth’s words of wisdom:

“Realise that what we produce in our jobs in communications is really like bits of tissue — briefly essential puffs of information that are ultimately discarded for the next thing. Important in the moment, but soon forgotten. Once you get over the idea that your work is precious and has to be perfect, it helps free you up to get creative on how to approach things.”

Mike Petroff is the Associate Director of Digital Content Strategy at Harvard University. One of the challenges that Mike faces in his role is the impossibility of a university like Harvard ever being able to experiment in secret. Once they trial an account on any new platform, they’re instantly in the spotlight. But Mike doesn’t let the spotlight and the grandeur of the University stop him from experimenting with different mediums to communicate serious subjects.

“At Harvard, we experiment with animated GIFs to showcase research, learning opportunities, and campus events. GIFs are sometimes dismissed as being unsophisticated, but we’ve changed attitudes through real-world examples from publishers (like The New York Times) and highlighting internal collaborative success stories. GIFs are now part of our social and multimedia publishing strategy.”

Emma Leech, Director of Marketing and Advancement at Loughborough University has more bling in her trophy cabinet than Michael Phelps. Winning award after award for the work that Emma and her teams at various universities have delivered and the impact that they’ve had, Emma’s a master of pushing creative ideas to the fore and making them a reality. Here’s what Emma offered:

“Start with strategy and clear objectives. Craft the message, plug in emotions, scope channel options and devise great content that will resonate with your audiences and, importantly, be stand-out and sharable. Work out how to amplify that and maximise impact via PR but avoid stunts.”

Mark Greenfield, Director of Web Services at the State University of New York at Buffalo seems to agree with Emma’s advice for being strategic while being experimental. Amongst the people in my network whom I rate as really “knowing their stuff”, Mark is high on my list. He’s an outstanding public speaker and acts as a consultant and advisor to others. Quite simply, he talks an awful lot of good sense. Here’s what Mark had to say…

“Experiment with purpose. New communications tools offer great potential but you need to stay focused on the why. Know the problem you are trying to solve. I would also advise to fail fast and fail forward. Learn from both the initiatives that work and those that don’t.”

Let’s hop to the other side of the world for a moment, over to Cameron Pegg, Executive Officer – Deputy Vice Chancellor (Engagement) at Griffith University. Amongst the people I’ve met and connect with from Australia, Cameron really stands out as someone that has his finger on the pulse and thrives on absorbing best practice from around the world, and using that to inspire his own creative thinking. I’m currently in love with the Know More in 60 Seconds video project from Griffith University. Cameron is inspired by using gamification to encourage people to raise their own game:

“Grow an environment where experimentation is not only encouraged, but expected. Infographics are a case in point – create a weekly competition where your design, comms and web team members pitch creative visualisations of a particular university research project. Everyone learns from each other and the best ideas are given the oxygen they need.”

Hopping back to the USA again, and this time to a lady who has a knack for inspiring creativity and experimenting in a way that injects humour, fun and great engagement, but without ever compromising her university’s brand. Lori Packer is Web Editor at the University of Rochester. I fell in love with Lori when I heard her speak at Confab Higher Ed (go to this conference, it’s great) about experiments that they’ve tried in their team, and particularly when they re-created scenes from the University using Lego for the website for April Fools day a few years ago. Lori shared same fantastic advice with us for this post, but here’s the tip that I think really needs to be shared far and wide:

“Be prepared for success. We usually do a pretty good job of preparing for failure. “Well, that didn’t work. No need to ever do that again.” But what about preparing for success? Sometimes success is harder to manage than failure. What if the video package that took two weeks to shoot and edit is a huge hit and now everyone wants one?! Be prepared to explain honestly the amount of work and resources that went into an experiment, what you plan to do next to build on it in a sustainable way, and perhaps negotiate for more resources to do the successful things more often.”

This post would not be complete without a contribution from one of the most creative and experimental up and coming professionals in our sector. The adorable Ma’ayan Plaut, Manager for Social Strategy & Projects at Oberlin College, is one of the people I gush about most often when asked “who does good things in our sector?” One of the brains behind the Why the Fuck Should I Choose Oberlin site, Ma’ayan has a beautiful knack of knowing when to go all out and when small experimental tweaks will suffice:

“Many of our recent experimental approaches are small internal tweaks to content production, which in turn makes our final product a more complete package that’s easier to distribute piece by piece or as a whole. This is most apparent in our video production right now: more and more of our videos are shot with a writer and our video producer present, so right off the bat, we have a written and visual story (we shoot photographs and video while producing) from our initial effort. Additionally, when the video is finalized, we also create a short edited trailer (appropriate for Facebook and Instagram) and animated gifs (appropriate for Tumblr and G+). Here’s a blog post that shows all of this in action.”

I crossed paths in person with Simon Fairbanks, Undergraduate Marketing and Recruitment Manager for the College of Arts and Law at the University of Birmingham, for the first time in person earlier this year. But he’s become a firm favorite of mine to connect and chat with, not least because he jumped straight on Super and started to have a proper play with it after hearing me rave about it at a conference!

“At the University of Birmingham, we are always keen to experiment with new tools to promote our institution, whether it be augmented reality apps, virtual Open Day platforms or campus-wide instameets. My advice would be to keep an open mind when new opportunities arise, such as Google Cardboard and Periscope, and think about how they could enhance your existing communications. However, this bold experimental approach will require you to carefully measure the success of new initiatives to make sure they are adding value. Some experiments will work and others will not, which is inevitable. Ultimately, I believe it is okay to make mistakes: as long as you only make each mistake once.”

I’ve been a fan of Tim Nekritz, Director of Web Communication at State University of New York Oswego, for a good few years now since we first crossed paths while both speaking at PSEWeb in Toronto. Tim gave the most incredible overview of the potential for location-based networking I’ve ever seen. But it’s his empowerment of students as a voice for the University that really made me reach out to Tim for this post. This post would not have been published without a contribution from Tim:

“Empower your students to tell stories and let them experiment. The Alyssa Explains It All student video blogging series has become a sensation. An intern created initial content strategy for and launched our Pinterest account. We shared student-provided moving-in tips. Students do week-long Laker Takeovers of SUNY Oswego’s Instagram.”

Last, but by no means least we hear from is Steven den Boer, Social Media Editor at Radboud Universiteit in The Netherlands. Steven rocks, and his enthusiasm for pushing the boundaries and trying new approached to communications and engagement really stands out. Steven needs to be applauded for sharing his successes and failures in communications experiments, and committing to help others grow more confident in their experiments. I think his words of advice really sum this blog post up and draw a close to our month of posts about experimenting really quite nicely:

“Just do it. Large organisations tend to have a structure that doesn’t stimulate experimenting. The process, planning and project structure gets more people involved that give feedback, but also more people that need to give permission. My advice: sometimes you just need to do it. Experiment, see what happens and when it works, then start explaining what you did. If it goes wrong, remember: it is easier to ask for forgiveness than for permission.”

My thanks to everyone who contributed to this post. If you’d like help to experiment a little more in your own organisation, then do drop us a line to see how my colleagues and I at Pickle Jar Communications can help you with strategies, planning, research, creative thinking or facilitating creative planning sessions. Or if you’re at the CASE Europe Annual Conference this week (1-3 September), pop along to the exhibition hall for a chat to Ellie, Kate and Rosie on the Pickle Jar stand.

Post header image sourced and used, with thanks, under Creative Commons License from Clement127