By Robert Perry Posted in - Five Links On Friday on January 8th, 2016 0 Comments 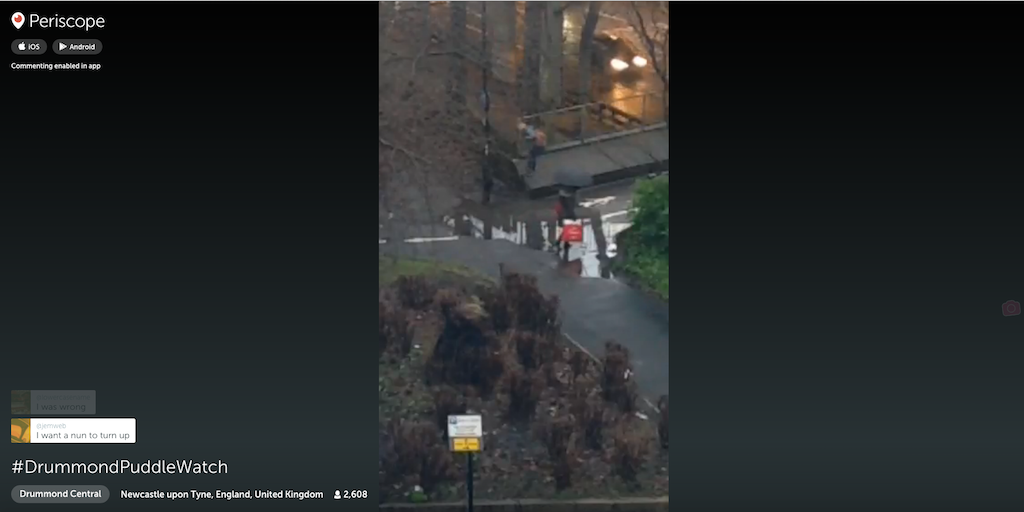 Here in Newcastle we don’t actually get much rain. It’s cold, but not wet. This means the appearance of giant puddles is an unusual occurrence, as evidenced by the popularity of DrummondPuddleWatch on Wednesday.

The Pickle Jar office was among the first of the half million people who logged on to the Periscope live steam of a puddle in Newcastle. In the beginning we were entertained simply because it was being hosted by an agency in our neighbourhood, but soon the puddle captured the attention of the nation.

As with any popular developing meme, it wasn’t long before brands got involved. No-one could have predicted that they’d need stock images of a puddle, so it was interesting to see who managed the best efforts with little time to prep…

Dominos managed to get a man on the ground:

The UK Star Wars account had a gif at the ready:

And Innocent, stalwarts of the social media zeitgeist, were quick off the mark:

3000 people are watching a puddle in Newcastle. Great Britain at its finest #DrummondPuddleWatch https://t.co/SslNEpwurK

The puddle was a completely unexpected phenomenon, as explained by the agency who set up the Periscope stream. What it shows is that there is never any way to predict what’s going to be the next big thing – so if you want to be able to jump on the big trends, you’ll need to be on the ball.

And now for this week’s five links…

This week started with a case study on the power of good communications, which we were obviously interested in:

We always keep an eye on the world of MOOCs, and 2015 saw their popularity soar:

Do you think the proposed 10,000-character limit for tweets is a good idea? The FT has some thoughts:

What do you think of the proposed #Twitter10k? @FinancialTimes discuss the pros and cons: https://t.co/NBkaF47iNl pic.twitter.com/wnmRtoDQZh

Finally this week, some stats on the importance of digital platforms for international student recruitment:

That’s all for this week. If you want to get in touch, or if you want help setting up a puddle live stream, just let us know.