Silence is still a statement. Time to get loud 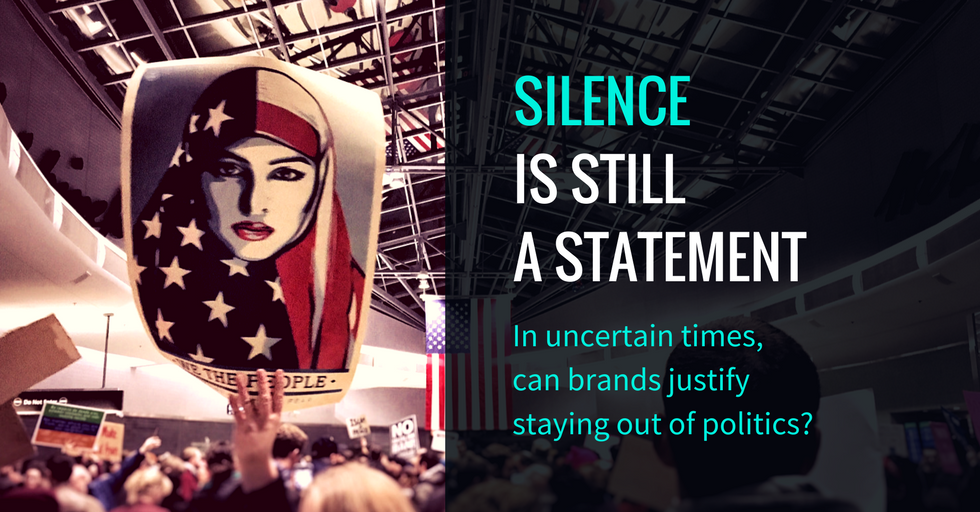 I went on a trip this weekend. I switched my phone off for two days, and the world went away. Because – for people like us – the bombs don’t often fall at our doors.

That’s a big deal, because it gives us the freedom not to participate. And even the impression that participating is a bad idea.

The times they are a changing.

If you’ve ever run a company social media account, you’ve felt that light-but-firm ghost-hand on your shoulder. Brands are told to engage, and to reach people. But to reach them softly, and to use the largest whaling net possible. We’re told to preach humour, conversation and brightness. We’re told to chase the topical, unless the skies get cloudy.

The skies are cloudy now, but this time it isn’t enough to find cover and wait it out.

Social media can make people and organisations powerful, but it can also fill them with fear. Everyone knows a story of someone that leaped into an online tornado on an everyday sunny weekday morning. I once ran a workshop in which a member of the audience asked if they could send every tweet that their team drafted up to senior management for “approval”. That account is probably still awaiting its “hello world” moment.

Social media is scary, instant, visceral and reactive. As a result, there’s a general concern about brands throwing themselves into heavy discussions. There’s a feeling that everything is essentially “fine”, and that a brand busting into a political row like the Kool Aid jug crashing through the wall is disconcerting, discordant and an unnecessary risk to business.

Some people think companies and celebrities should “stay in their lane”. When American footballer Colin Kaepernick protested violence against the black community during the national anthem, he was told to stick to sports. When Ewan McGregor refused to be interviewed by Piers Morgan on morning TV over comments about the Women’s March, the former editor admonished him for not focusing on promoting his new film.

Sorry to hear that @mcgregor_ewan – you should be big enough to allow people different political opinions. You’re just an actor after all.

So it’s no wonder that companies don’t want to rock the boat by doing anything more adventurous than sharing TGIF gifs.

This morning, I saw a Facebook post on a page dedicated to a family dog. The “voice of the dog” said it was sick of everyone bickering about politics, and that it was time to take back everyone’s Facebook feeds by posting pictures of cute pooches.

There will always be room for humour, and reminders of things that make us smile. We need our spirits for the road ahead. But we can’t just hide in our colourful playrooms while the house is burning down.

It’s been a rough stretch. The Summer rage over Brexit has been knotted tighter since the election of Donald Trump in America, and this week’s restrictions on movement into the US from certain Muslim-majority countries have doused the collective mood with the sour tar of dystopia.

People are noticing which companies are taking a stand. Facebook’s Mark Zuckerberg issued a milquetoast post expressing “concern” but praising Trump for murmuring about doing something for “the best and brightest”. SpaceX and Tesla CEO Elon Musk asked for feedback he could pass on, while stressing on Twitter that he could only push to amend rather than revoke the ruling.

There will be more days like these. And – because of that – the old rules of “staying away from controversial topics” shouldn’t necessarily be written in large red letters on a social media strategist’s cork-board.

For a while now, several companies have built trust and loyalty by highlighting the ethics of their brand. For example, The Co-operative has an “ethics in action” plan which sets out how the company addresses issues such as global poverty and climate change. Retailer John Lewis is known as an employee-owned business in which staff have a share in company profits.

However, over the next few years, businesses and organisations are going to see an increased appetite for companies that are willing to take a tough and risky ethical position, as well as a soft and safe one. In these times of political tension and awakening, customers are going to feel ever-stronger ties to the companies that are willing to “step out of their lane”, take the hail of tomatoes, and stand firm. And – yes – they’re also going to remember the ones that aren’t.

This isn’t a social media technique, tactic or trick. It’s a responsibility. It’s a reminder that a company is made up of people, and people stand together against darkness.

You can donate to the American Civil Liberties Union via the link, or support a charity or action group of your choice. Silence is a stance in times like these, so make yourself heard.