Election reflection: what GE2019 means for HE content strategists 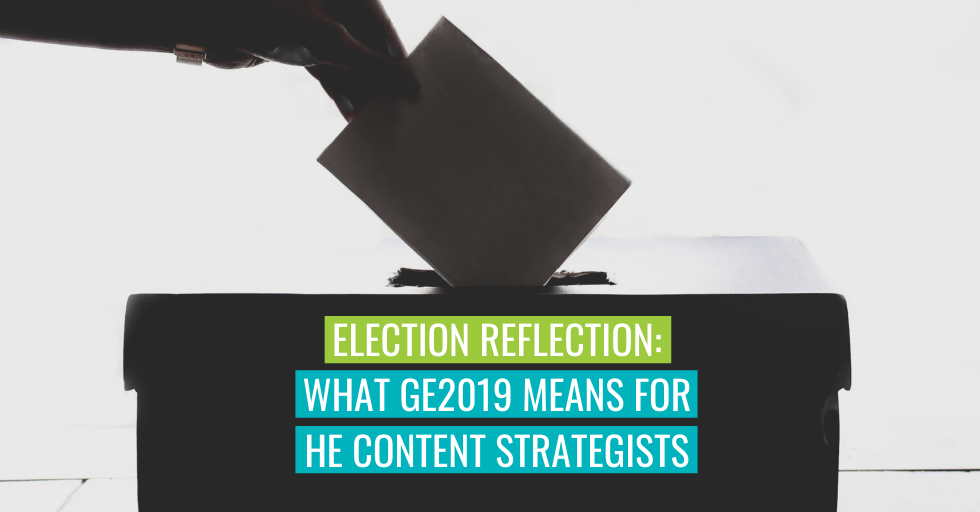 You might not expect to find politics on the blog of a content strategy consultancy, but we’ve got a good reason.

We’re education sector specialists, and a large portion of our work is carried out on behalf of UK universities. These are organisations who have to negotiate the winds of political change on a frequent basis.

After Boris Johnson led the Conservatives to a larger-than-expected majority last week, I thought it might be worth looking at some of the potential impacts of that result – and what it might mean for those of us working in higher education content strategy.

The main thing we need to acknowledge is the scale of this change. This is the first time in over 25 years that a Conservative government has both the time and the majority to enact sweeping changes to the higher education sector. Although the 2010-15 coalition government had a similar majority – and made some pretty big changes of their own – we’ll now get to find out what unrestricted Tory HE policy looks like in the 21st century. We don’t know any detail on what that is yet, but there are a few things that we might want to prepare for (and I’m not even going to mention the B word)…

Are we under attack?

A manifesto isn’t always an accurate guide to what a party will do in Government, as much as we’d like (or expect) it to be.

But we do know that the Conservatives have attracted votes from many that are uncertain (or even sceptical) about the importance and value of university education. And their manifesto itself contains language that could be considered quite hostile to the idea of broad access to higher education.

The manifesto indicates an intent to target the proliferation of what it calls “low-quality courses”. We can only presume that’s code for courses that are not perceived to be linked to higher earning potential. Humanities and arts courses often fall into this category, so these departments may find themselves with a fight on their hands.

That said, there are plenty of other signs we could look at, such as allocation of research funding and the manifesto’s musing on the Augar recommendations. And the most worrisome battle ground could be “freedom of speech”.

Many Conservative politicians and commentators have criticised universities for what they see as infringements on “free speech” on campuses, citing guest speakers who have been protested against or students who feel they can’t air their views in safety. The manifesto echoes these comments, pledging to “strengthen academic freedom and free speech in universities and continue to focus on raising standards”.

So what does this all mean for those of us working in content in higher education? For me, it highlights the importance of our ability to communicate more than ever. Universities may have to fight hard to demonstrate their value over the next few years, and to do that they need to speak loudly and clearly about what they offer.

As an industry, we need to know what people want from us, and we need to be able to deliver it. We have to address the concerns of local communities, councils, schools, businesses, policymakers, and funders.

We’re in a position to be able to carry out research with our different audiences and develop content that tackles the issues they need us to tackle. The civic university agenda might come under fire at times, but our ability to communicate, explain, and demonstrate our value to our towns and cities will be more vital than ever.

And we need to do the same for prospective students. Recruitment should never be just about getting the numbers up, but now there’s even more imperative to empathise – we need to learn about what students are looking for in life and help them achieve it.

We have to be transparent about the impact higher education can have on a young person’s life, and what they have to do to make the most of the benefits it can bring.

This becomes even more important when we consider the efforts many universities have made in widening participation amongst those from less-advantaged backgrounds. Over the last few decades, more and more students from less “traditional” backgrounds have attended – and succeeded at – university.

Content strategy should never purely be about the daily production of web pages or social media posts, dictated from on high, but the most essential part of how the university presents itself to the world. This election result gives us, as content people, the chance to argue the case for our institutions – and I think we need to embrace it.