Star Wars, Marvel, and some lessons for HE content strategists 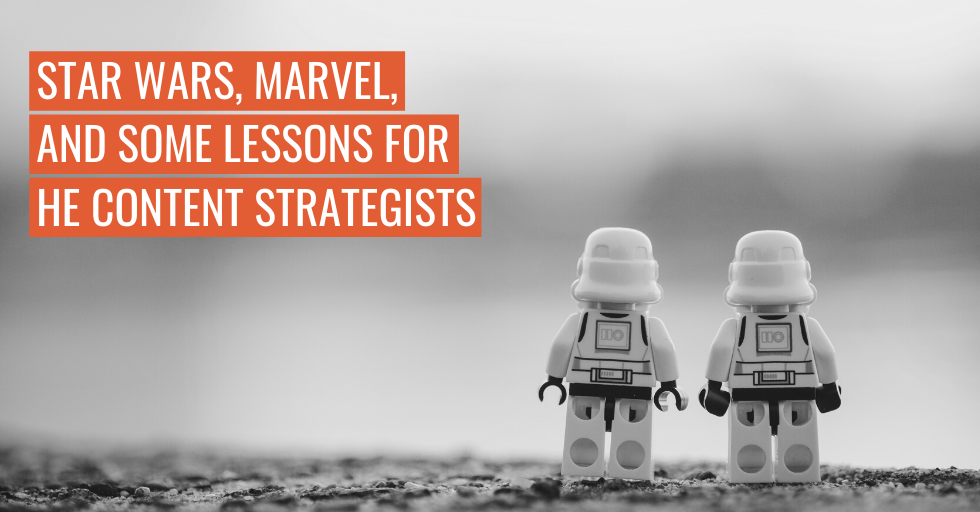 I’ve been thinking about superheroes and Star Wars recently, and I honestly think there’s a lot we can learn about approaches to content strategy from some recent cinema experiences of mine…

HELPFUL NOTE: There are no spoilers in this post, so if you haven’t seen the latest Star Wars film, you’re safe to read on.

In 2019 movie fans around the world were finally able to see the conclusions of two long-running cinematic stories. Avengers: Endgame concluded the 22-film story that Marvel had started telling with Iron Man in 2008, and The Rise of Skywalker was the ninth film in the series that began in 1977 with Star Wars.

When I saw Endgame I was hugely impressed. As well as the general blockbusting enjoyment it provided, it felt like the successful culmination of years of work by a dedicated team, pulling together story threads from two dozen different films. So when I watched Rise of Skywalker and it felt like a disjointed mess, I was disappointed – but it also made me think about the strategies behind each series.

Both of these cultural juggernauts are part of the ridiculously massive Disney corporation, who have been overseeing production of the films in these series throughout the 2010s. So the marked difference in the outcome is interesting to me, considering that both properties are ostensibly run by the same company.

In contrast to the more cohesive impression given off by the Marvel movies, the new series of Star Wars films made me feel like something had been lost along the way – had they deviated from a plan, or an intended design? Or had there never been one to start with?

After a bit of research, it turns out that there wasn’t really a plan at all – each film was given to a different writer and director to create, leading to three very different films which lack a solid connecting thread running through them.

When I found this out, it all made sense. It was very similar to the set-up I’ve encountered at many universities when it comes to content and marketing – the silos, the lack of communication, the lack of an overarching plan.

When compared to the Marvel approach, the difference become even more stark. In that series, there were more films, more directors and writers, but even so a cohesive narrative was formed. In this case there was a clear strategy in place, and one that everyone had bought into. This felt like the examples of good cross-department working I’ve seen – even though the individual elements are potentially quite distinct, there’s a plan that brings them together into a unified whole.

Essentially, there were two very different strategic approaches – and outcomes – at work in the two series. Star Wars was operating like a tighter, smaller organisation that needed close oversight in order to convey a single narrative – but that didn’t happen, and as a result the audience was disappointed in the overall result. For Marvel, it was a longer-term strategy, in which the separate elements could be more varied, but still spoke in a similar voice.

If there’s anything to be learned from this, it’s the need to identify the approach you want to take, and get your people on board with it. Otherwise you run the risk of losing an audience that might otherwise have been big fans.

If you want to talk more about why it’s better to take the Marvel approach over the Star Wars one, or why exactly I found Rise of Skywalker disappointing, you can find me on Twitter, or email.