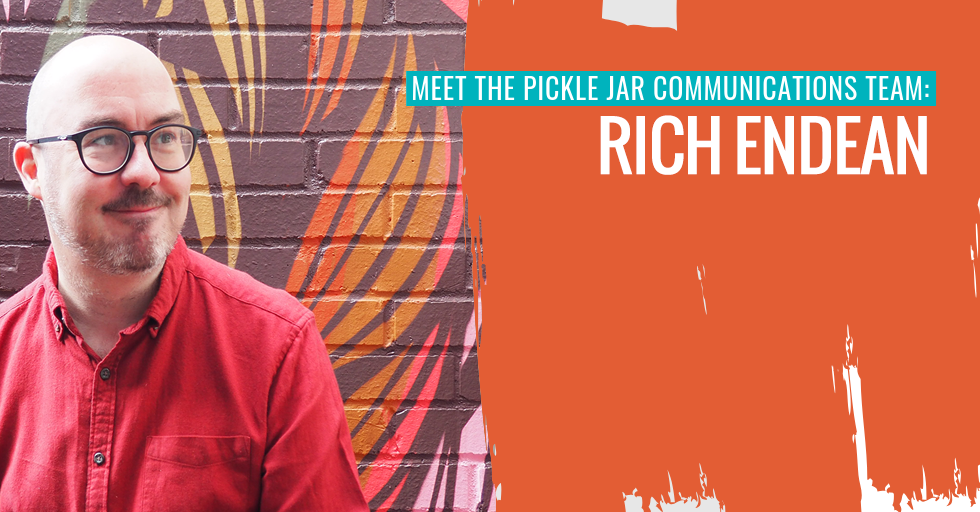 Meet Rich Endean, Senior Design Consultant at Pickle Jar Communications. We asked Rich a few questions to get to know him a little better.

1) Tell us a little about yourself

I was always drawing stuff as a kid, so it was a natural thing to progress into something art and design-related as a career. I did want to be an air-traffic controller at one point in my youth, but everyone who knows me will attest that I’d have made a terrible air-traffic controller, so it’s perhaps just as well that I ended up at design school.

2) What’s your background as a designer, and what sort of work have you been involved in?

So after graduating from Northumbria University, I started life as a junior designer in a small marketing start-up business. No one-else in the team had design experience at the time, so it was a bit of a sink or swim scenario for me – but a brilliant learning curve. Sometimes there’s nothing like being thrown in at the deep end, especially in your first job.

Now I’ve been ‘in the game’ for near-enough 18 years, and been lucky enough to work on a variety of different things… from developing branding for start-ups to fairly meaty creative campaigns for things like encouraging behavioural change. I’ve done lots of publication design, and more recently a lot more social media-based creative work.

And I’ve also done some fairly random but fun things. I’ve worked with 5-years olds driving Little Tykes cars like lunatics while co-directing a road-safety video, I’ve travelled round Tees Valley with a giant red training shoe in the back of a trailer to make a tourism promo. And I once accidentally set fire to myself on the top of a hill while doing a campaign shoot with a photographer, while wearing a ‘homemade rocket pack’ made out of a water cooler bottle and a plant pot with a sparkler stuck in the end of it.

3) What sort of design work most inspires you? Are you a fan of any particular professionals, creators or organisations?

So some of the big-name graphic designers that have inspired me since my University days – and still do – are designers like Vince Frost, Vaughan Oliver (also ex-Northumbria) and Tibor Kalman. In general terms, I love a good, clever typographic piece of work. And it’s a skill to execute well. But there’s lots of brilliant designers out there to follow, especially among my own peers.

I think for a designer, if you see something out there and you say in your head “Dammit. I wish I’d done that” it’s a piece of work you can take inspiration from.

4) How do you like to go about working on design projects, and making sure you get something clients love?

I think taking time to understand and get to know the client is key. And not rushing off too early without understanding the full picture. I think it’s impossible to design something effective if you don’t take the time to get under the skin of the organisation that you’re working with to a degree. Otherwise it’s just superficial design.
It’s not wrong for a client to ‘not know exactly what they want’.

To be honest, that’s pretty normal. My job is to try and pre-empt that and hopefully get it close to the mark first-time-round. And you can only do that if you’ve had those conversations and both have the same understanding of the brief.

5) How do you keep your ideas and style fresh, and find out exciting new ways of doing things?

We’re bombarded by visual design all the time. All of us. And most of us probably don’t realise. So as a designer, content-creator or consultant, I don’t really need to go hunting for the next big trends and fresh ideas, because they’re served to us in a plate on our devices, on our televisions, in the magazines we read and on the billboards we drive past every day.

There are great ideas everywhere, as long as you keep your eyes open.

6) You’re also a photographer, and you create and edit videos. What sort of things do you do?

As recently as 10 or 15 years ago, it was not uncommon to be solely a print designer, or solely an advertising creative. Today I think it’s vital to be much more flexible. So for me, it’s been important to build up experience in areas like video production and motion graphics – especially now we’re so heavily reliant on social media channels.

So I’ve worked on a range of things from short-form documentaries to animated presentations – and even shot and edited a video that was a big part of my wedding ceremony!
When it comes to photography, I’d say 10% is professional and 90% is for my own enjoyment. But being a visual person, I love to take a wander with my camera and hopefully capture the things that maybe other people just don’t notice.

7) What’s it been like joining the team during a global pandemic?

It’s been a pretty crazy time in general terms. Obviously, when ‘lockdown’ happened it was pretty clear that I wouldn’t be commuting to Pickle Jar HQ. But as we’re able to easily work online as a team, everything is pretty seamless. And though it’s weird having not met everyone face-to-face, I feel like I know everyone already through our regular online team video chats.

8) Apparently, you’re not even the most famous person in your own house. Who is Elvis?

Elvis is a nine-year-old Boxer-Labrador cross that my partner and I rescued from a local animal rescue shelter around seven years ago. Being excited dog-parents, we decided (possibly foolishly) that it would be a fun idea to set up a dedicated Facebook page for him, and now he has over 2000 followers and is a little bit of a local celebrity!

He’ll be joining me at Pickle Jar Communications as Head of Barketing, so expect to see a little more of him once he settles in with the team and we’re able to get back into the office!

9) What sort of things are you most looking forward to, working with clients in the education sector?

I’ve worked with a couple of Universities and HE/FE institutions before, but I’m excited to be joining a team that actually specialises in the sector. One of the things that appealed to me about joining Pickle Jar was the fact that the team are all genuine specialists in the field and know their stuff. So there’s no smoke and mirrors.

I’m excited to be able to bring in the things that I’ve learnt and experienced in other sectors and areas of work, and explore how we can use all that to hopefully inject some new ideas and insights into the education content ecosystem that we operate in.