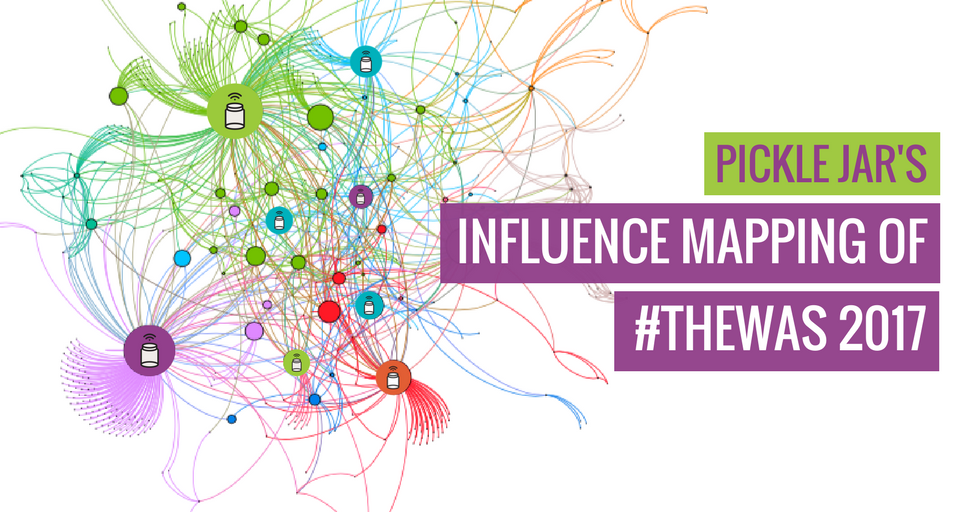 After carrying out some analysis of last week’s CASE Europe Annual Conference, I was in the mood for some more influence mapping. Luckily for me it’s conference season, and there’s always another HE event on the horizon to take a look at…

This week I’ve decided to look at Times Higher Education’s World Academic Summit, which uses the lovely acronym THEWAS. This was a two-day event taking place at King’s College London, and included speakers from universities and related organisations throughout the UK and across the world. This broad mix of topics and attendees should lead to an interesting map – who would command the most influence this time?

For an explanation of how these maps work, you can have a read of last week’s post from CEAC17. But essentially, this is a map of people on Twitter who mentioned #THEWAS over the two days of the conference. The larger an account appears, the more interaction they were having with others talking about the event. Closely related accounts are grouped together on the map, and those sharing a colour are usually discussing similar topics or using the same keywords while doing so.

As we might expect from a conference hosted by THE, the publication’s official account is the most dominant player on the map. That said, there are other accounts that got people talking – Ellie Bothwell and Phil Baty, both THE writers and speakers at the event, were involved in enough conversations to become little hubs in their own right. Other members of the THE team such as Chris Parr and Chris Havergal also feature as influential accounts.

The THE World University Rankings for 2018 were released at the conference and generated a lot of interest – so the official account for the listings occupies a prominent spot in the lower left of the map.

There are – of course – many universities represented on the map by delegates, but some universities accounts appear themselves. King’s College London is there as the venue for the event, but others such as UCL, Oxford, and Glasgow are also there, though somewhat less prominent. 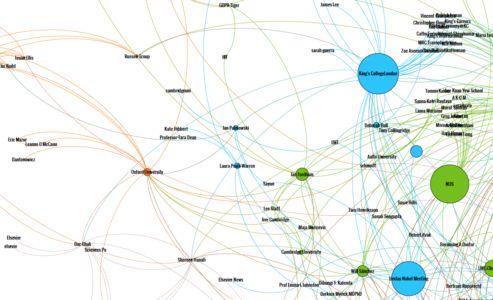 Download the full map to explore all the relationships from the event – if you commented during the event you might find yourself.

If you’d like a little more explanation about these maps, or if you’ve got something similar you’d like us to look at, just let me know.