We haven’t had enough of experts 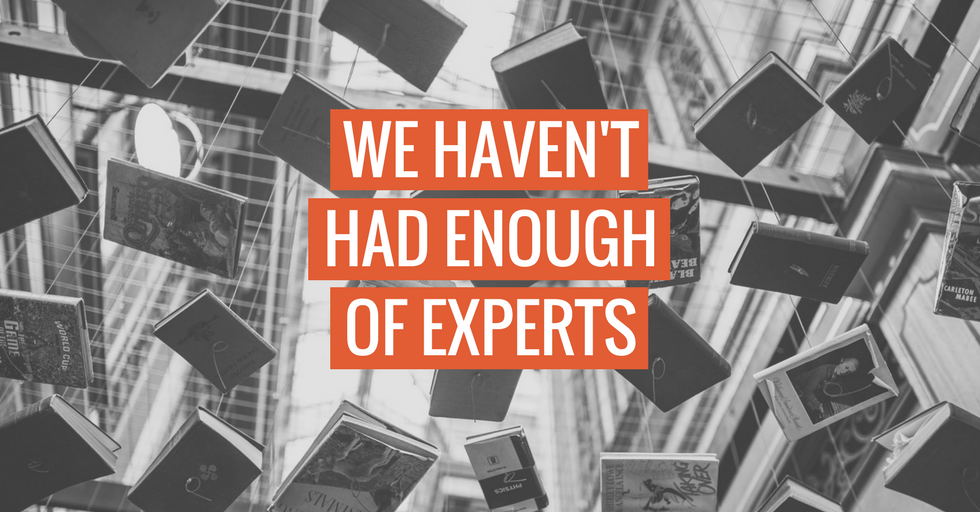 It’s getting harder and harder to know what to trust on the internet. It’s not just a case of avoiding the horribly-termed “fake news”. Overall, navigating the maze of conflicting information from supposedly reputable sources is becoming more and more difficult.

It’s not surprising that readers struggle to work out who to place their trust in. It would be nice to think that the education sector could be seen as a haven for trustworthy sources of information – but can we rely on that? After all, it’s only been a couple of years since Michael Gove told us that “people in this country have had enough of experts”.

The Edelman Trust Barometer for 2018 also contained some harsh truths for marketing and communications teams, as it revealed that public trust in “the media” has fallen to 43%. But education institutions aren’t “the media”, right? Well…

So that’s the bad news. The good news for us in the education sector is that while trust in the media had fallen, trust in experts had actually risen – with technical and academic experts sitting right at the top of the credibility field: 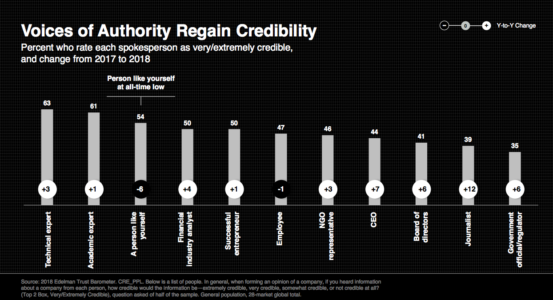 And it just so happens that universities and colleges are sitting on quite a decent repository of academic and technical expertise.

So we need to capitalise on that. The education sector is home to experts, and we can make use of them. We’ve blogged before about getting academics involved with social media, and since then we’ve worked with clients to help them get the most out of the eager social communicators they have in their institutions.

I’m not saying we need to close down our central social media profiles and leave marketing to academic accounts, but there are benefits to using personal accounts as communication channels. As the research above suggests, people often prefer – and have more faith in – the human connection.

Outside the education sector, it’s been proven that personal accounts get better engagement than corporate ones. An investigation into the response of the public to Twitter accounts of police forces in the UK compared “official” accounts to those of on-the-beat coppers. It found that central accounts were more likely to be followed, but far less likely to get involved in discussions or provoke interactions from followers. Personal accounts, on the other hand, were much more engaged with their followers and generated far higher response rates as a result.

Obviously personal social media accounts can’t solve every issue. There needs to be a process in place for escalation of problems, transferring specific requests to the right team, and so on. A good social media policy or guidelines can help in these situations.

This is about more than just social media accounts, though. This is about getting the experts involved in all aspects of communications. Getting these influential institutional representatives to buy in to your strategy and objectives will give you a boost in so many ways, such as offering new ways of thinking, or discovering hidden areas of university work you’d not known about before.

I’ve been talking here about academic experts, but universities have more at their fingertips than that. There’s also full of expertise in support service fields, or health and wellbeing, or even our own advancement areas, for example. Messages about any of these areas will come with a stamp of credibility if there’s a human associated with them.

People trust other people – and the people they trust most are experts. So let’s embrace that.