Making the leap from writing to talking 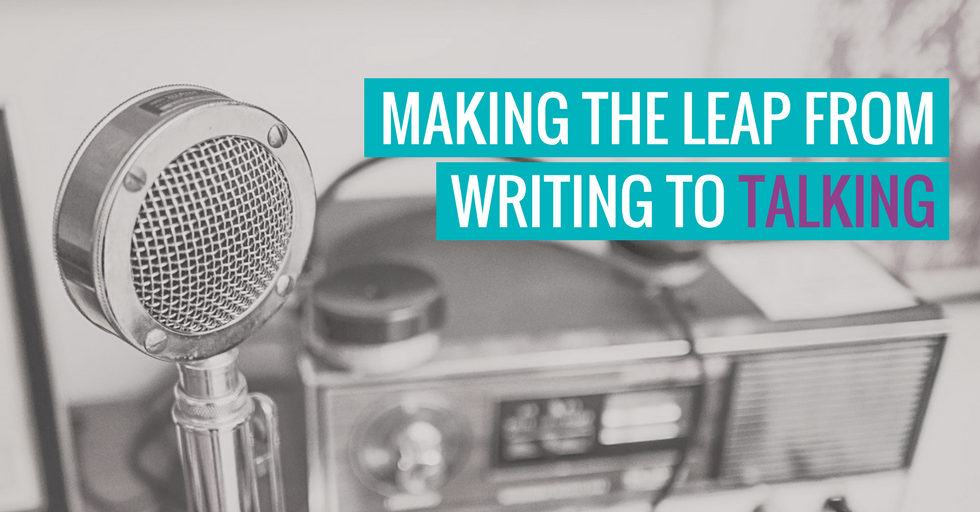 Let’s cut to the chase. Right now, I’m in love with Retropod.

Retropod is a Washington Post podcast. It breaks down stories from history, ranging from the tale of the 17-year-old who struck out baseball legend Babe Ruth to the origins of the NRA. These stories are adapted from The Post’s often-detailed history blog, Retropolis.

And yet, it whips through stories in roughly four to seven minutes.

Which is such a breath of fresh air that I’m almost crying right now.

Podcasting has been around for nearly 20 years, but it’s hot right now. So hot – in fact – that someone in your department has probably already suggested creating one as part of your content strategy. And you twitched. Because you already knew in your heart what it would probably become.

An hour-long recording of two people talking without a break in an echoing room about a subject only they care about.

Or…some poor soul reading their last blogpost out loud, exactly as they wrote it, in a monotone that suggests that they’re waiting for the ground to swallow them.

It’s not just podcasting’s fault. We cross-post between different mediums all the time, often with terrible results. It’s how we learn, but it’s not ideal.

So what can we learn from Retropod about making something work in a different format?

Retain the Narrative…and then cut

A couple of weeks ago, my colleague Rachel Smith touched on the structure of narrative, and creating stories that move with tension toward a climax or resolution. I won’t go too much into that here.

What I’m talking about is knowing the difference between the bits of the story that flesh it out (some of which you can probably cut) and the spine of the story (which you totally need to keep in or the whole thing turns to jelly).

When we adapt, we tend to leave too much in. Either because we’re a Harry Potter screenwriter who doesn’t want to get disembowelled on Reddit, or an underpaid comms staffer who’s getting angry emails from academics about how essential every comma is.

The hard lesson here? Know what’s vital, but don’t be afraid to cut around it. A lot.

Case in point: Retropod’s episode on Dr Spock. It’s the story of America’s beloved author and paediatrician, who was put on trial for helping others to resist the Vietnam War draft.

It’s adapted from an informative but lengthy story by Ian Shapira, which you can find here. Ian’s story is interesting, but it doesn’t all appear in the final podcast episode. That’s because the podcast episode has settled on a strong spine for the piece: Dr Spock’s arrest, trial, conviction and acquittal on appeal.

That leaves no room for other, more general plotlines in the written story. Speeches and placards from protestors at the Boston demonstration. The reaction of leading conservatives. Some of these choices may have been hard, but you have to make tough choices to adapt properly.

They’re useful background. But they don’t push that tight, focused story on. So they go.

Compare the two side by side. And consider what sacred cows you can remove from your own project.

“If you’re of a certain age. You probably know Dr Spock. No, not the guy from Star Trek. The famous paediatrician. At one time, America’s most beloved and trusted doctor.”

That’s the first section of the Retropod episode on Dr Spock. And here’s the intro to the article, on Retropolis.

“He was America’s most beloved and trusted paediatrician, with millions of parents following his instructions for caring for babies and children.

So the Jan. 5, 1968, federal indictments against Dr Benjamin Spock and four other Vietnam War opponents stunned the nation. The New York Times and The Washington Post gave the story front-page play.”

There’s one simple reason why they’re different, of course. They’re by different authors, with host Mike Rosenwald taking up the baton from Ian Shapira on the podcast.

You’ve probably already considered how your brand’s voice changes between platforms. It’s not the same on a prospectus as it is on Snapchat. That’s partly due to the audience, but also due to the medium itself. Audio is no different.

In an exceptionally good post on shifting from print to radio storytelling, Alison Macadam points out that listeners “don’t control the pace of the story” in the same way that readers do.

“Radio is linear; it always moves forward. The words and sounds whiz past the ear, with no opportunity to slow down or rewind (unless you’re listening online or on mobile, and even then, rewinding isn’t easy). You forget names and titles. Too many numbers make your head spin.”

That’s why people scripting radio learn to shorten sentences. To use pacing. To avoid detailed statistics, or long references. If nothing else, because they don’t want to run out of breath.

Another important quest? To find your voice. When you’re writing for audio, write like you talk, even if that feels too informal. Read your words out loud. Use short sentences. Use the phrasing that’s natural to you.

The alternative is that your audience feel like they’re talking to a 70s sci-fi robot.

Okay, so we’re not using the word “show” literally here. Bear with me…

Radio – like any creative medium – is a way of passing on information and conjuring pictures. Writing, film, dance. They’re all designed to put images in our heads in their own ways. We just need to play to the strengths of the form.

When you’re switching from print to audio, you’ll have to get rid of a lot of things that work in one, and suck in the other.

“Was the federal government really going to imprison the 64-year-old baby doctor because he’d allegedly encouraged young men to resist the Vietnam draft? And what about Spock’s four alleged co-conspirators? Would the Johnson administration lock up a Yale chaplain (who was a former CIA operative), a Harvard graduate student, a former aide to President Kennedy and a New York writer?”

One of the great strengths of writing is that it can go anywhere. You can describe a scene, and then wander seamlessly into a character’s thoughts. That doesn’t fly in film and audio, unless you fancy sitting around for a long speech from a disembodied narrator (I’m looking at you, original Blade Runner).

So if you’re adapting to audio, get rid of the internal monologue. Get rid of the need for exposition, and heavy narration. And focus on what audio does brilliantly.

In the recent Retropod episode, The Day Martin Luther King Jr Died, one of the most compelling moments comes when Bobby Kennedy has to break the news of the civil rights leader’s death to a crowd in Indianapolis. You can hear the heartbreak, the anguish, the pain in the recording.

It’s described in the print story like this: “There were audible gasps.”

Audio has the power to dredge up emotions, memories and atmosphere. But when we adapt, we don’t often use it to its full potential.

So think about how to inject different voices into your piece. Ambient sound from locations that relate to the story. Sounds and music that capture the feeling you’re trying to get across.

Don’t just rely on one voice, reading in the darkness. Don’t just describe the scene, create it.

Because no one wants another unedited hour-long discussion in their headphones on a dreary commute.

Interested in experimenting with podcasting at your university? Editor of The Native and Lead Social Media Strategist at Net Natives, Dave Musson, will be speaking at ContentEd 2018 in June about why and how we should be using podcasts more often in higher education.