Is your university’s story a 2,000 word Tinder bio? 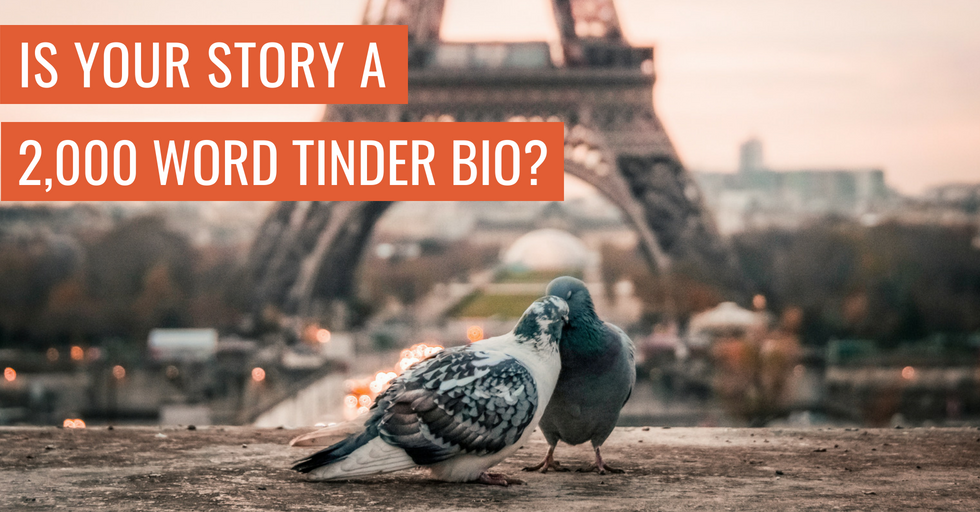 Imagine yourself in a forest. You’re making your way through the trees, slowly and steadily.

Why are you there? And how are you feeling?

We are all creatures of story. And in seconds – with very little prompting – we create scenes and tales in our heads.

They may not all be wildly different. But every one will be unique.

And that’s one of the secrets of great, enduring stories. They’re not just birthed whole from the head of the teller.

They’re a duet. And the aim of the teller is to make the listener’s imagination pop, because that’s where the colour comes from.

As you tell your story, every single member of your audience is filling in the blanks for you. So you’ve gotta leave room for them somewhere in every story you tell. Or it will fall flat.

Last week, I watched a promotional video for a respected research university.

I learned about the location. The history of the university. The achievements of students. The local nightlife, food, and community. The cost of living. League tables. Their hopes, dreams, ambitions, and lofty promises.

The video lasted five minutes. And I learned some things, because I concentrated really hard.

But I didn’t feel there. Because the video didn’t leave room for me.

See, there are some great campaigns out there, from universities who have nailed it because they instinctively know their audiences. But all too often, when institutions start planning a campaign, they’re like a seven-year-old visiting Santa at the shopping centre.

They’ve got a couple of minutes. And they’re going to holler every detail that comes into their heads.

In theory, that sounds sensible. After all, who doesn’t want a lot of information when they’re making a decision?

But what we’re doing here isn’t helpful. It isn’t even storytelling. We’re the guy on a first date who spends an hour talking about his career without stopping. We’re the workshop facilitator with 500 slides and no exercises.

When I was eight, I bought a Sherlock Holmes anthology at a charity shop. It was a newer volume, with illustrations. And I felt disappointed and sad, because I didn’t want pictures telling me what people and places looked like. I already had those pictures in my head.

When we see a university on screen, or on paper, we think we want information. But what we really want is a story, with us at the centre. We want to picture ourselves there. We want to imagine what it feels like to score the winning goal in that sports centre, have an epiphany in a lecture hall, or fall in love on that secluded strip of grass near the lake at sunset. We want to see our journey in every successful alumnus, and our face in every crowd.

Cheat us of that, talk over us, and you cheat yourself of the connection you want.

So how do we know when we’re doing this? Here’s an example from your old VHS collection.

Many years before Blade Runner was a classic, it was a risk. In a running battle with the studio, director Ridley Scott and lead actor Harrison Ford were asked to add narration to some of the key scenes of the film.

Seeing as we’re not in the business of over-explaining things here, I’ll hand you over to Frank Darabont of Shawshank Redemption fame (which is no stranger to wordy narration itself).

So what’s the big sin here? After all, Blade Runner is swimming in unanswered questions.

Only, nah, that’s not true. In a well-crafted story, there are no unanswered questions… because the audience passionately, violently, urgently fills them in for you.

You just have to have the confidence to let them.

So look at your own video like the “tears in rain” scene. How much information do you need to make an impact, and when did you just start talking over someone else’s imagination?

When I talk about this in workshops, I like to point to a TED talk by Toy Story, Finding Nemo and WALL-E co-creator Andrew Stanton. He talks about the “Theory of 2+2”. The idea behind this – according to Andrew – is that “the audience wants to work for their meal. They just don’t want to know that they’re doing it”.

Part of the joy of a story is applying our own meaning. Our own backdrop. Painting a moustache on the villain because he reminds us of a former history teacher. Arguing over what it all means, and whether the teller’s left us some secret clues somewhere.

Because when people say a story is a snapshot, they’re wrong. A story is a single sweeping brushstroke, a path through the woods by lamplight.

The storyteller’s lamp lights part of the way. But the listener supplies the sounds, the world beyond the darkness, and what lies within it.

Your role isn’t to describe the scene to them in endless detail. It’s to put them in a place, plant the seed of a feeling, and leave the rest up to them.

That way, when they get to the end, it’s their journey. A different journey.

And you both might end up somewhere you didn’t expect.

Want advice on how to tell your institution’s story? Come and chat with us. We can work it out together.