Our guide to Birmingham for CASE Europe Annual Conference 2019 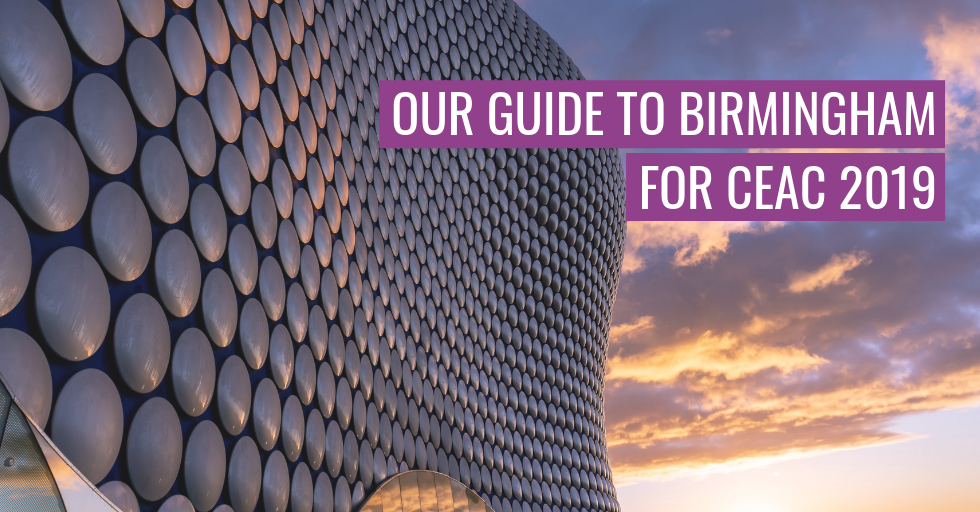 Our Senior Content Strategist, Simon Fairbanks, has written this handy guide to Birmingham for those who visited the city for the CASE Europe Annual Conference 2019. Simon has lived in Birmingham for over a decade and recommends his favourite coffee shops, bars, restaurants and sights.

It is a moniker that has been given to Birmingham because we have the second largest population in England.

However, ask any proud Brummie and they will tell you straight: we aren’t second to anyone!

Birmingham is an exciting, multicultural, artisan city, with an incredibly diverse population. We are the birthplace of Cadbury’s chocolate, The Lord of the Rings, and the founders of heavy metal, Black Sabbath.

We are home to a labyrinthine network of picturesque canals, a rich array of beautiful parks, and the tallest free-standing clock tower in the world.

The food isn’t too shabby either. Our curries are legendary, our street food festivals win awards, and our four Michelin-starred restaurants continue to delight. We also have a thriving independent scene offering everything from bakers to brewers to baristas.

These are some of the many reasons why 48% of University of Birmingham graduates choose to make Birmingham their home after graduation.

But for those attending CASE Europe Annual Conference 2019, you will only have three days to enjoy our wonderful city. I hope my tips below help you make the most of your time here in the first city.

– Faculty – A small, spartan but perfectly formed gem in the Piccadilly Arcade near Grand Central. The coffee is deliciously sweet, plus they have their own in-house bakery, crafting all manner of marvellous goodies.

– 200 Degrees – A fiendishly-popular haunt on Colmore Row, serving miraculous coffee. They are so clued-up about making Joe that they have a barista school in their basement. Their cortado is a winner.

– Java Lounge – A charming, high-ceilinged coffee shop, also on Colmore Row. They are masters of latte art and offered crash courses at Birmingham Coffee Festival. It’s harder than it looks.

– York’s – This corner café based on Stephenson Street is perfect for a brunch stop. Their Arabian buttered eggs and avocado smash are national treasures.

– Medicine – The coffee hits the spot, but the baked goods are the real draw here. Gorgeous concoctions are piled high upon entering. Follow them and drool.

– Jekyll and Hyde – Quirky and inventive cocktail bar. If you like your cocktails served in watering cans and miniature porcelain baths, then this is the place for you.

– Purecraft Bar and Kitchen – Expect a comprehensive range of taps to suit all tastes and sublime bar snacks, including designer pork scratchings.

– Tilt – Tilt offers tasty tipples and old school entertainment with its trademark row of pinball machines. A fun and informal way to spend your downtime.

– Bacchus Bar – Bacchus Bar offers a surreal décor of medieval suits of armour, Greek and Roman mosaics, and Egyptian paintings. Named after the Roman God of wine, so you know they deliver on the bar front too.

– The Pint Shop – Marvel at the blackboard upon entering, listing their extensive range of beers. Their gin cocktails are top-notch too. And it would be rude to drop by without tasting their onion bhaji scotch egg.

– The Lost and Found – Endlessly stylish bar, embracing a botanical theme in its cocktail menu and décor. Their pergola is the perfect backdrop for a photo with your cocktail.

– Something special – Treat yourself to a unique dining experience at the 80s-inspired Nocturnal Animals. Alternatively, a trio of high-end Indian restaurants – Asha’s, Itihaas and Pushkar – will prove why Birmingham is famous for curry. If Chinese is your preference, then dine under gorgeous cherry blossom at Tattu.

– The Library of Birmingham – Our ornate Library, opened by Malala in 2013, is a stunning jewel in our city’s literary crown. It features two public roof gardens offering sweeping views of the city’s skyline.

– Birmingham Museum and Art Gallery – The venue for our welcome drinks on Tuesday night is also home to the largest public Pre-Raphaelite collection in the world, and the largest hoard of Anglo-Saxon gold ever found.

– Brindley Place – We are famous for our canals and there is nowhere better to watch the boats chug by than at Brindley Place with a waterside drink.

– Selfridges – There are few sights more Instagrammable than the outside of our Selfridges, which is coated in reflective disks, like futuristic bubble-wrap. The food court and shopping on offer inside is worth a visit too.

50 reasons to stay away from Birmingham – a purposefully-ironic blog post by the Independent Birmingham team on why you should never, ever, ever go to Birmingham, full of gorgeous photography of the world’s best city.